Bring a smile to a child’s face 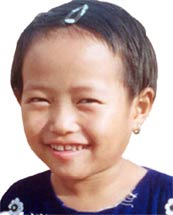 The child you see in the photograph is Lovis, one of the eighty children or the orphanage. She was brought into the orphanage when she was a little over three years. She was scared an silent. Just a little time ago, she had been a mute witness to the brutal killing of her parents. Her parents were religious leaders who were massacred by a group of anti-social elements. The incident took place early one morning just as Lovis got up. Unable to understand the magnitude of the tragedy but overcome with grief and pain, Lovis became silent and withdrew into herself.
She never smiled.

Lo an Behold! Elena’s efforts were rewarded after three months when Lovis began to smile again. Today, Lovis is as happy and cheerful as any of the eighty children in the orphanage.

Most of the children in our orphanage have similar painful experiences.


There are more than 320 children awaiting Sponsorship!
Help to smile again!